I, like all Brits love the Cillit BANG advert. It's cleverly shot, presented and produced. Its a modern day classic, which I hope to remember as long as the J.R. Hartley ad.  But is the new revolutionary product really as good as Barry Scott will have us believe? Can we trust TV? Would my life improve if my pockets were full of sparkling coins? Who cleans their coinage anyway? I decided I wanted to find out...

If you haven't seen the advert, grab the copy I stole here (570k .wmv) so that you are up to speed.

I, like many men my age, have a traffic cone.  You never know quite how you got it, but one morning, you just have one.  One day I decided to put a base on it, and use it to collect loose change.  Years later, and its full of 1 and 2 pence piece's. 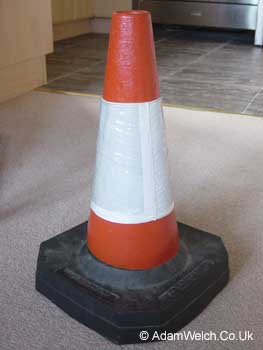 I took a trip to my local Morrisons supermarket to buy the kit needed. 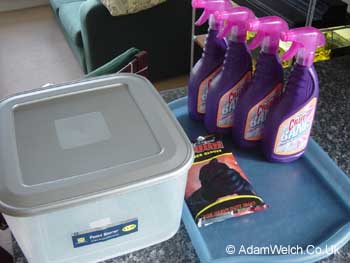 Thanks goes to Debbie who served with a smile. 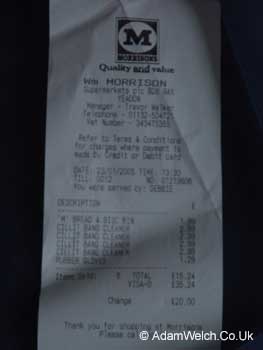 I had already organised my coins into categories ready for cleaning. 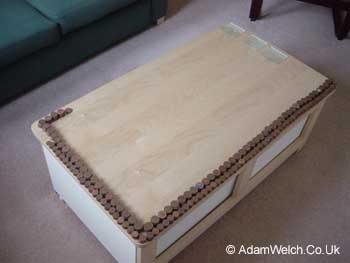 Coinage fans might like to know, the coins ranged from my favourite, the 1971 two pence piece, to the 2004 penny. 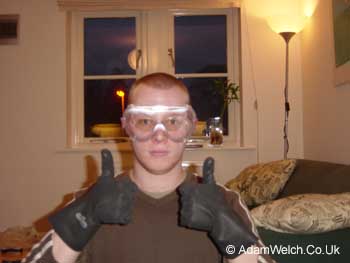 Safety First Kids; I did try and get pink rubber gloves, but they only had black in my size.
At this point I would normally make a joke about a man with big hands... 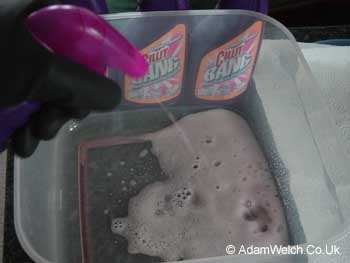 So I started to fill the container with the apparently magical Cillit BANG! 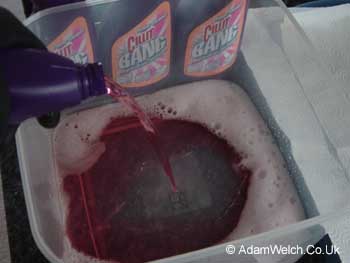 It wasn't long before I realised that it would be far quicker to remove the trigger top, and pour the mysterious fluid into the container. 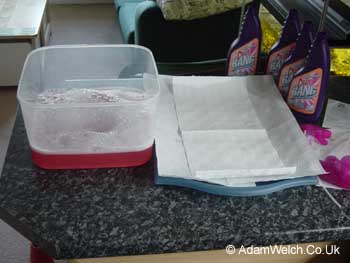 I lined my £1 tray from IKEA with kitchen towel for the drying process (both of which I already had). 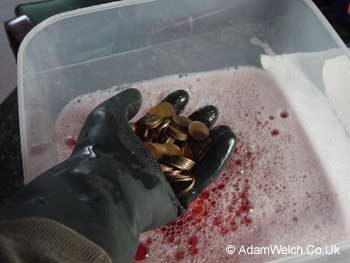 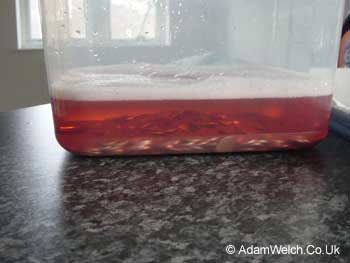 Following the adverts instructions, I left all the coins in for about 15 seconds. 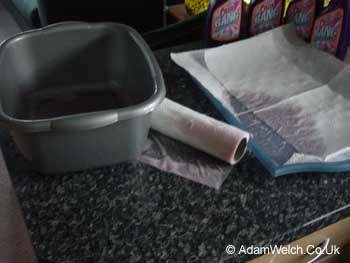 After a small spillage trying to pour out the magic liquid into another container... 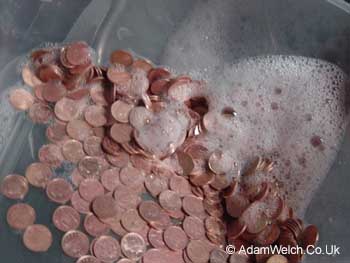 Bugger me, it works! 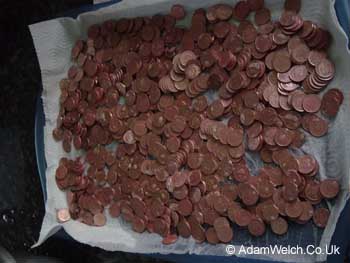 Now to the drying process. 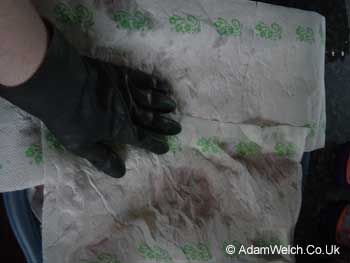 Cover it in kitchen towel and pad down gently. 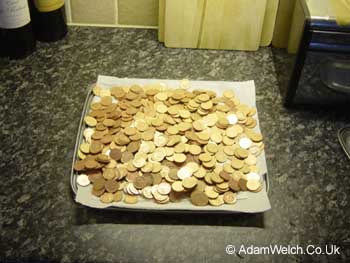 All shiny and new, sparkling under the light! 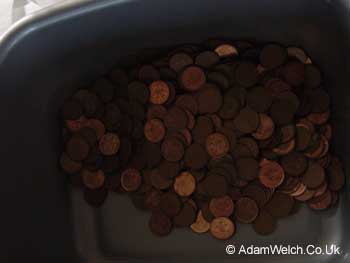 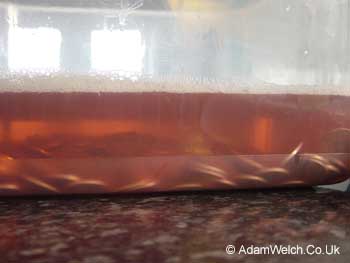 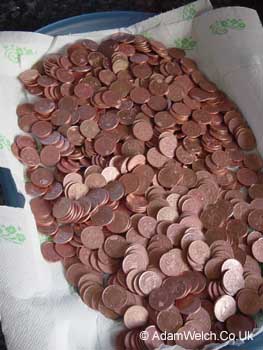 The same was repeated with the 2p's. 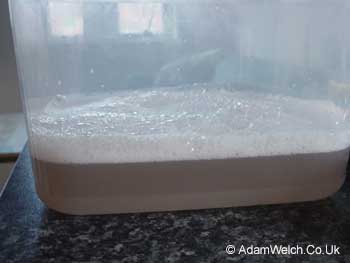 Look at the change in colour to the mysterious fluid!

All is well in the world, I am safe in the knowledge that I am being told the truth on TV.  That's great.

Or at least it was until I bothered to look at the label... 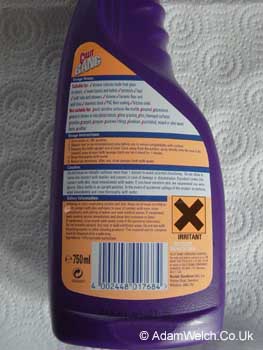 What the hell?  So hold on a minute, the advert shows you something it's NOT suitable for?  I have just recreated the advert to find out you SHOULDN'T do it!  The advert only has a chance to destroy that one penny.  I've put £20.27 into this stuff!

BARRY SCOTT IS A LIAR!

So what is going to happen to my coinage?  Is it all going to disintegrate and disappear?  Will it go see-through?  Or worst or all, spontaneously spring to life and roll down a drain?   But the glass doesn't have to be half empty does it? Perhaps they will all change into pound coins.

Answer;  Basically they all got a bit tarnished again, and seemed to loose their shine. 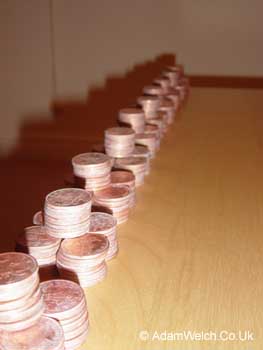 The coins have now been cleaned in this 'wondrous' fluid, but what have I learnt?

Further research on the interweb led me to find a website which tells me 'Barry Scott' is fictional.  The character is played by Neil Burgess, who also features in a Brian McFadden video.

But what could I do with all this copper? 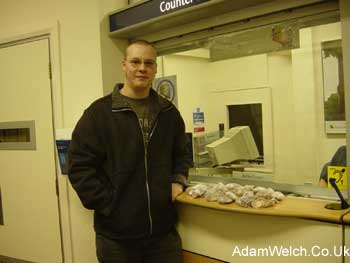 At this time, I think there is only one thing I can do with it.  So I bagged it up, took it to my local bank, and donated it to the DEC's Tsunami Earthquake Relief Fund.  A massive thank you and well done goes to Barclays Bank.  They have matched my donation penny for penny.  So this exercise has donated £40.54 to the fund.

Quick thanks to Debbie (Morrisons), Kellie (Barclays) and 'Barry Scott' from Cillit Bang T-Shirt and Wallpaper website where I nicked some info, pics and the vid!

Oh, if anyone is interested I have some second hand Cillit BANG! for sale, as I poured it back into the bottles.

Thanks to the nice people at B3ta.Com linking to me, I have had many emails asking many different questions.  Lots of people have pointed out that 'copper' coins are no actually entirely made from copper any more.  After 1992/3 'copper' coins were made from steel.  However these steal coins are still copper plated, so I am happy that I have not misled anyone.

I have also found out that the 'calcium' experiment in the advert is also a dodgy claim.  Calcium tablets like the one used in the advert will react as shown, IN WATER.  Calcium is a fairly reactive substance, but PLEASE DON'T TRY THIS AT HOME, I  have been given information by a better chemist than I am, suggesting this reaction creates poisonous gasses.  This should only ever be done in a fume-cupboard.  Thanks to Mark for pointing out I was wearing

Finally.  Many people have suggested I should sell the used Cillit BANG! to raise even more money for the Tsunami Appeal.  I have placed one bottle on ebay.  I will pay the postage, and all the money you give will be donated to the DEC's Tsunami appeal.

To my knowlegde, my 'experiment' was not used as evidence.   Many thanks to Sheelagh for the clipping.

Cillit BANG! is a trademark of the Reckitt Benckiser people